My Life in Basketball and Lessons Learned

Stories of the basketball life of Hall of Famer Satch Sanders, playing on the second-most championship teams in NBA history.

The 'You' Lessons of Competition

Who is Really the Number One Winner?

It's your attitude that helps to determine how you are perceived by workmates, family, and friends. If you think that the only winners are those with the big jobs, the most money, the most fame, you are undervaluing yourself. This presentation will help you to recognize the winner within.

Do It For YOU First!"

Many of us want to do so much more of everything. However, we seem to always find "us" standing in the way. This presentation will help us to move out of our own way and begin to reach the success levels that will enable us to help ourselves and others. It will also deal with the subject of leadership and followership.

Team player? Not Until You Are Prepared to be the Best Teammate!

Most people want to be a team player, particularly if it is a business, job, or a social requirement. The real questions that need to be answered by anyone who wants to be on "the team," are the queries that deal with getting prepared to be a team member. This presentation will help build the bridges between role situations and good chemistry. 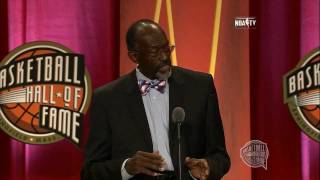 Thomas “Satch” Sanders was one of the great defensive forwards in basketball. A Helms Foundation First Team All-America at NYU, Satch adapted to his new surroundings as a rookie with the Boston Celtics in 1960 by sacrificing his offensive skill set to contribute on the defensive end, playing alongside teammates Bill Russell, Bob Cousy, and other greats. Night after night Celtics coach Red Auerbach assigned Sanders the unenviable task of stopping the opponent’s top offensive threat. Satch handled the dirty work guarding the

likes of Pettit, DeBusschere, and Baylor. The eight-time world champion finished his playing career in 1973 after 13 professional seasons, all with the Boston Celtics.

He stayed in New England taking the reins of the basketball program at Harvard University for four seasons before returning to the Celtics, first as an assistant coach and then briefly as a head coach. He remained “the coach” by concurrently running an annual two week New Hampshire basketball camp for 38 years.

Satch soon traded the sidelines for a desk job founding a number of player programs to give NBA players the tools to be successful in basketball and in life. For 18 years he was the vice president and director of the National Basketball Association Player Development Department, where he founded the NBA Rookie Transition Program. He introduced initiatives for young players and veterans alike, helping superstar athletes understand and appreciate their status as role models, leaders, and celebrities. He came to the NBA from the Northeastern University’s Center for the Study of Sport in Society where for two years he helped to create new approaches to balancing college athletics and academics. He is the author of Satch’s Commuter Moments, a whimsical book revealing a keen eye for the roles we all play in the passing parade called humanity.

His #16 is proudly displayed in the upper right-hand corner of one the Boston Celtics retired number banners at TD Garden. Satch was elected to the Naismith Memorial Basketball Hall of Fame in 2011.

“Satch not only met our expectations, he exceeded them. He was a pleasure to work with and all of our attendees commented on his friendly demeanor and the time that he took to speak to each person. Even as I was walking him out for the evening, he stopped to take a photo with a young boy who was overjoyed to meet him. I would highly recommend him to any group that was interested in having him at an event. Thank you.”