Catch Your Future: Pursue the Career You Want & Be Successful (College Students)

All too often, students begin their secondary education with little idea of what they want to do with their lives. Some lack motivation. Outside influences might be preventing them from connecting with who they are. Students without a clear sense of purpose can become desperately unhappy, underperform – drop out of school. Nick Tokman empowers students so they figure out what they want to do, make sure they pursue a career they are passionate about and ensure that they remain focused on finishing their degree. Nick illustrates how to think creatively about achieving one’s goals. He provides students with focus to persevere, finish their education, encouragement to get involved on campus and to lay the foundation for successful careers. Students will learn:

Catch Your Future: A Journey to the Deadliest Catch (Students grades 4-12)

Many students ask themselves, “Why can’t I just be me and be accepted for it? Am I good enough?” Pressures are coming at teens and “tweens” from all directions: peer pressure at school, the struggle to fit in, high expectations from family, the destructive power of negativity, distractions from social media… This can rob them of their self-esteem and divert their focus from what matters most, making them uncertain as to what they want to do with their lives.

Nick empowers students to overcome the obstacles and negative distractions that prevent them from connecting with who they are so they can achieve THEIR definition of success. Nick is not a stereotypical “follow your dreams” speaker. The presentation is focused to address issues such as dropouts, student involvement, class performance and preparing students for their future. Students will learn how to:

Better yet, they’ll learn in an entertaining and memorable way. 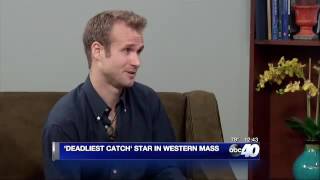 Nick Tokman, also known as “Sunshine” on Discovery Channel’s Deadliest Catch, is on a mission is to empower others to overcome all of the distractions and obstacles that get in the way of owning who they are so they achieve THEIR definition of success. An engaging and animated professional speaker, he directs his audiences to focus their attention on what’s important for them in their lives so they reach their highest potential.

Nick has been seen on the show for the past four seasons entertaining more than one million viewers each week. He is recognized for his constant, upbeat attitude, his unwavering focus on achieving his goals, and his determination in the face of adversity.

Nick’s grandfather introduced him to Deadliest Catch for the first time at a point in his life where he felt unfulfilled. After seeing the show, Nick decided he HAD to go crab fishing! Although his family did not want him pursuing a career in one of the most dangerous professions, he realized this was HIS life; he had to live it for himself. Four years after embarking on his journey at the age of 20, after persevering through a series of setbacks and failures, including hospitalization, running out of money and battling homelessness, Nick landed on the very show that inspired him to venture to Alaska.

As a cast member of the Emmy-Winning show, he battled some of the harshest working conditions known to man, including 30-35 foot rogue waves, freezing temperatures, extreme physical labor and 20-hour work days. Nick has proven himself physically, mentally, and emotionally capable of overcoming arduous obstacles.

Nick is a member of the National Speakers Association. His audiences nationwide range from students in elementary school through high school and college and universities as well as corporate audiences. Nick was the Keynote speaker at the 2017 SkillsUSA annual National Leadership and Skills Conference, speaking to over 16,000 students and teachers.

“One of the best youth presenters I’ve ever seen in nearly 2 decades in the business.”

“The moment he stepped on stage he connected and captivated the students, so much so that he received two standing ovations.”

“Nick was a hit with our student audience. We really appreciated the extra effort he put into making his presentation something to remember.”

“Nick’s animated personality, commanding presence, and overall sincere demeanor gained him the respect of both my students and staff so much that he received a standing ovation at the close of his story!”

“Your message of perseverance, honesty, and being true to one’s self was perfect for our group. And you were a professional and a pleasure to work with too!”

“Thank you for coming to our school and sharing your story. It meant a lot to me. I took your story as a reason to do what I want to do. I enlisted in the army and was sworn in on 12-09- 15 due to your story of following your dreams.”

“I highly recommend Nick to any organization looking for an extraordinary communicator who can move an audience to unexpected places.”

“I strongly endorse Nick Tokman and unquestionably believe that his story and message should be heard by students of all ages.”

“As part of his motivational talk he gives away the book ‘The Alchemist’ to a lucky student. This gesture motivated our English Department to include the book within their curriculum reading list.”

"His conversational speaking style, soul-bearing story, and true compassion for young people created a clear message that left us breathless!”

“Nick was such an engaging and dynamic speaker! Our students were highly engaged throughout his presentation and is truly due to his ability to connect with the audience.”