Going Global: How to Adapt Communication Strategies For Different Countries and Cultures

In this Keynote session, Kara Alaimo, Ph.D., a former global communicator in the Obama administration and United Nations and author of the book "Pitch, Tweet, or Engage on the Street: How to Practice Global Public Relations and Strategic Communication" (Routledge, 2017) will discuss how to adapt your communication practices for different countries and cultures. She will take the audience on a tour of the world's ten "cultural clusters" - Confucian Asia, South Asia, Sub-Saharan Africa, the Arab world, Latin America, the Anglo cluster, Latin Europe, Germanic Europe, Eastern Europe, and Nordic Europe - and explain the strategies, tactics and messages that work best within each of them, from the need to convey emotion in the Arab world to the importance of enlisting independent social media influencers in China. The information is based upon interviews she conducted with senior communication executives in 31 nations

In this dynamic Keynote, Kara Alaimo, Ph.D. will discuss how social media and other new technology were used in the 2016 presidential election - including President Trump's use of Twitter and the role of hackings, psychographics obtained from social media, "filter bubbles" and fake news. She will discuss how businesses and other organizations need to prepare to address new vulnerabilities that emerged during the 2016 election, such as fake news and Twitter attacks by President Trump. She'll also explain how companies should decide whether and when to publicly weigh in on the contentious political issues now on the national agenda. 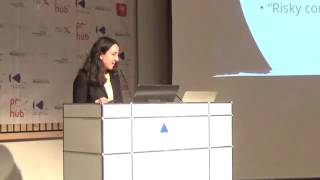 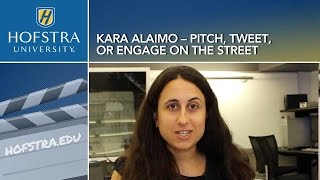 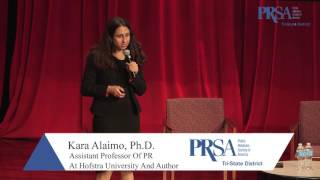 Former global communicator in the Obama administration and United Nations, author of Pitch, Tweet, or Engage on the Street: How to Practice Global Public Relations and Strategic Communication, Assistant Professor, Hofstra University

Kara Alaimo, Ph.D. is a global public relations consultant, trainer, and professor and author of Pitch, Tweet, or Engage on the Street: How to Practice Global Public Relations and Strategic Communication. A former communicator at the United Nations and in the Obama administration, she develops communication campaigns for clients such as the United Nations, organizes employee trainings for companies on how to adapt messages and strategies for different global markets, and speaks at events around the world. Dr. Alaimo is a member of the public relations faculty at Hofstra University. Her articles about international and political communication have been published by media outlets such as The New York Times, The Washington Post, The Atlantic, Harvard Business Review, CNN, Bloomberg, Al Jazeera, Fortune, Columbia Journalism Review, Newsday, The Hill, and The Huffington Post. She has been interviewed my media outlets around the world, including the BBC World Service and The Los Angeles Times.

From 2012-2013, Dr. Alaimo served as Head of Communications for the United Nations Secretary-General’s High Level Panel on the Post-2015 Development Agenda, a group of heads of state and other eminent thinkers convened to recommend the world’s next plan for eradicating poverty and achieving sustainable development. In 2011, she was appointed by President Obama as Spokesperson for International Affairs in the U.S. Treasury Department, where she communicated global economic diplomacy initiatives, including America’s bilateral economic relationships; engagement in multilateral institutions including the G-20, World Bank, and IMF; and international monetary, trade, development, environmental, and energy policy. In this capacity, she also served as media adviser to Jim Yong Kim during his successful 2012 campaign for the World Bank Presidency.

Dr. Alaimo earned her Doctor of Philosophy, Master of Philosophy, and Masters of Arts degrees at the City University of New York, and her Bachelor of Arts in Journalism at N.Y.U.

“Kara's presentation on communicating in different cultures was both highly fascinating and incredibly valuable. Already I've found ways to apply the knowledge gleaned to real world situations. In an industry where communicating one's ideas clearly and affectively is of the utmost importance, knowing how to do so in a multitude of cultures is the next step to becoming a world-class communicator - and we're grateful we were able to provide this experience to our conference attendees with Kara's exceptional guidance.”

"Kara's presentation was exceptional and highly rated by the attendees. Her forward thinking views on the PR industry and beyond are must-see by anyone in the industry. We look forward to working with her again!"

“Although we rarely invite the same expert to speak at the #WCFDavos summit for two years in a row, with her impressive presentation, Kara Alaimo wowed the audiences at the World Communication Forum in Davos in 2015, leading us to invite her to step out again in 2016 and join our advisory board. She is a confident, engaging speaker who gives her audiences some truly savvy, forward-thinking advice for adapting their communication strategies to different situations and cultures. It is difficult to obtain this kind of insight and information from other sources. I strongly recommend her as a top speaker on Global Strategic Communication.”