The wars following 9/11 have provided a unique opportunity for former athletes who became Navy SEALs to return home with combat proven fundamentals of human performance forged in an environment where success had life and death consequence. The Fundamentals of Winning Curriculum developed by former NCAA D1 Athlete and Navy SEAL Team Leader Jason Kuhn provides combat tested principles that will help you train for an elite mindset and championship culture so you can be at your best on and off the field individually and as a team. This presentation will demonstrate 10 combat proven fundamentals of human performance including: 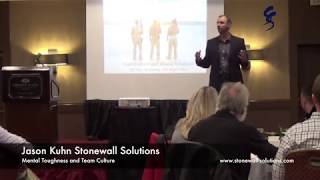 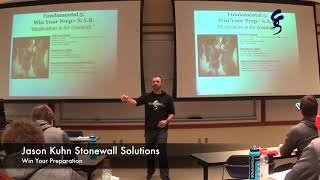 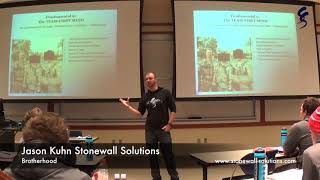 Jason Kuhn is a former NCAA Division 1 Athlete and Navy SEAL Team Leader. He pitched for a top 25, nationally ranked baseball team prior to joining the Navy after the attacks on the World Trade Centers. He is a contributor for Inside Pitch Magazine and a guest on the 2016 Mental Games All-Star Summit. He holds a Master's in Global Leadership and is a mental skills and team culture coach. He is the owner of Stonewall Solutions LLC a mental toughness and leadership development consulting company.

In the military, Jason led small teams of U.S. and foreign troops on special operations in Iraq, Afghanistan, and Africa, receiving a Bronze Star with “V”. In 2014, he began receiving requests from NCAA teams, professional athletes, and corporate CEOs for advice on improving performance training specific to mental toughness and leadership development. He began utilizing experiences from special operations and translating the skills to the highly competitive environments of business and athletics, receiving a feature in the New York Times in less than one year of creating the instruction when NY Yankee Garrett Jones credited it to his success.

Through his passion for helping others achieve their dreams, he created The Fundamentals of Winning Curriculum and has since been recognized as an expert in mental toughness, leadership development, and team building by clients ranging from professional athletes, corporate CEOs, and sports psychologists across the country.

His unique program has shown proven results at every level. The Independence High School Football Team achieved a Max Preps #1 National Ranking, and 9-year NFL veteran and UCLA All-American David Ball states: “Nothing compares to what Jason has created.”

Jason began his program in the fall of 2014 with the Vanderbilt University football team and has since provided training to over 100 programs and thousands of athletes throughout the United States.

"Before I made it home from the convention, I had 12 phone calls from members of my team raving about your message. Jason is a must engagement for any organization. The message contained real world processes from a Navy SEAL that every business needs. Our team walked away focused, energized, and ready to embrace any challenge. He makes people better.”

“With a large and diverse group of men and women on our team, Jason delivered a message that will long live with our people and our culture. His real world examples of mental toughness, stories of success and failure resonated. I had countless people follow up with me that they were not only inspired from the day but want to embrace at the message and live it! Jason was able to understand our team’s story and history and relate it to his own. In today’s competitive environment, Jason’s lessons are what is needed for any good organizations to become great!”

"Jason Kuhn is a ‘must have’ if you’re interested in getting your team’s attention and then delivering rock solid advise on leadership principles and handling adversity. Jason’s extraordinary story and straightforward delivery was enthusiastically received by all in our company, and the line of folks stopping by my office thanking me for bringing him in has been long!"

"Our team had a blast learning from Jason. I highly recommend him to anyone looking to improve team chemistry."​

“They’re learning principles not only on the board and on video, but they are practicing and putting them to practical use. It’s really unique and very rewarding."

“Jones had hit home runs in consecutive games, including a three-run shot in the 11th inning that sealed the Yankees’ win...Cashman, though, was puzzled about Jones’s recent success. “I can’t tell you what I attribute it to,” he said. Perhaps Jason Kuhn, and the other soldiers Jones has met, can."

“Soak in every single detail you can. This has helped me in on and off of the field and I use what I have learned every day.

“I 100% endorse Jason and his training system.”

“Nothing compares to what Jason has created.”